This service provides basic conversion of your media recordings so that the new digital copies are suitable for sharing across the WEB or storage in the Cloud. We convert video and movie film to MP4 files, images to JPG files, and audio recordings to MP3 files. The services are applicable to:

What types of film do you scan and transfer?

What is your Film Scanning Process?

All film conversion processes include film inspection, cleaning, and repair. We repair old splices, remove blank film and damaged perforations, and replace the leader if necessary. Prior to scanning your film, we carefully clean it with a special solvent and no lint cloth. We use high definition film scanners (MovieStuff units - HD Snipers and Universal Retro's) to digitally scan and record the entire contents of each frame of your 8mm, Super 8mm and 16mm film. The captured film content is transcoded into an intermediate AVI or MOV file type, and then edited and reformatted into your specific requested product output. Example of output are DVD, Blu-ray Disc, mp4 movie files for viewing on computer, MOV or AVI movie files for editing, and Image Sequence Files (also for editing).

Film from multiple small reels (3” reels) is consolidated onto larger 7 inch reels for transferring purposes and for better storage. All original film is returned on either the film’s original reels or on 7 inch 400ft take-up reels. We offer ventilated archival can containers as an option for long term storage. The film reels or canisters retain their original markings (customer notes and sequence numbers).

What conversion options do you offer for the customer’s film?

Customers can order DVD, Blu-ray Disc, Standard or High Definition file types such as MP4, MOV, Apple ProRes, AVI, etc. We use Adobe's editing suite found in their Creative Cloud Premiere Pro. Almost any file type can be formatted using this tool. If you are wanting file types to share with others across the web or watch on your SmartPhone, we recommend H.264 MP4 files in progressive format. If wanting to edit the files, we recommend a less compressed file type such as DV25 NTSC MOV. We can also provide Apple ProRes file types to serve as long term storage master file copies. Data files can be returned to the customer on data disc, flash-drive, external hard-drive or via web download.

The screenshots below shows the extra content captured by the HD film scanner. Everything outside the yellow standard definition (4x3 aspect) box can be included in our HD data file formats.


The next picture below is of a Super 8mm film frame. Super 8mm film is wider than 8mm film. The dotted yellow line represents the pre-set standard definition 4x3 mask, and the solid yellow line is the pre-set high definition mask, displaying more content on Blu-ray discs or HD data files. Again, for the customers wanting data files, we can provide complete side to side content in the final product.

Film with Sound - Some 16mm and Super 8mm film have magnetic or optical sound strips, and we can transfer this sound along with the movie capture. If the movie film is silent, we offer unlicensed background music from a library of easy listening, instrumental, country western and soft rock selections. If your customer prefers licensed music for their background music, we supply that as well. They need to tell us what they want from which artists. The customer may also want to add voice-over narratives to the film transfer; the third person narratives are a great way to hear the stories that went with some of those memories.

How much film can fit on a DVD or Blu-ray disc?

What size hard-drive do customers need for film transfer?

Click here to view a table with film and video file types and their corresponding storage size requirements.

Will customers be able to edit a file version of their film?

We offer transfer of uncompressed files to hard-drive or data DVD for editing purposes. If you would like to do your own editing work simply choose either option when placing your order. If you do not have editing experience, but would like your valuable content edited click here to find out more about our premium editing services.

Do we return the customers’ original film?

Yes. After your order has been completed the new media is packaged together with your original film and it is returned to you in the same condition as we received it.

The transferred film content in not copyrighted by Cintrex. Copies can be made by the retailer at their store, or we can make copies of the DVDs for $6 each (whsle) or $10 retail.

Why do we splice 50 foot reels together?

Splicing 50 foot reels together allows for long uninterrupted segments of film that make your viewing experience more enjoyable. It also allows us to have a more consistently high quality product.

How can I tell the difference between 8mm, Super 8mm, 16mm film and 35mm film?

35mm film is about the same width as two fingers, 16mm is the equivalent width of one finger, and 8mm film is half the width of one index finger. Or you can use these diagram: 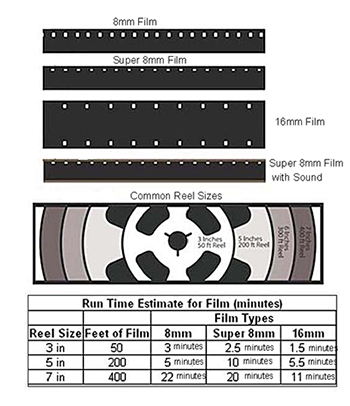 What are some of the common problems in Film Transfer?

Sometimes, because of the age of the film, the way in which it is was stored, and the technology and methods that were used to capture and develop old film, there are unique challenges and problems that can happen during film transfer. The more common problems in film quality are described below:

What if I want more than one copy?

Customers can order as many copies as needed. When placing your order you will be asked how many copies you would like.

Can we transfer broken or damaged film?

Yes. We will splice together broken film and removed damaged sections so that the remaining film can be captured.